Iranians are exceptional entertainers and are well known for their generosity. The Iranian people are hospitable and curious. They love to share ideas and meet new people. Traveling to Iran today may surprise you — it certainly will provide stories and memories that you won’t soon forget.

Decades of Western influence and modernization have created a contemporary society in which American visitors can fit comfortably. In business and in social settings, Iranians are gracious hosts.

During your visit, you most assuredly will encounter traditionalists who practice a strict code of behavior based on an ancient class system. At the same time, you’ll meet many modern Iranians who do not follow such codes and socialize freely with few reservations.

Food is a major part of any get-together in Iran — and you’ll experience plenty of different dishes. Cuisine in Iran is referred to as “Persian.” It closely resembles Indian food in many ways, and for good reason. The Persian invasion of India in 1526 left a taste for what was termed mughulai — piles of rice seasoned with saffron and topped with raisins, nuts, and various kinds of meat. Kofta is a popular mughulai made with meatballs.

Stuffed grape leaves and the kabob, with its cubes of meat, are staples in Persian cuisine. Iranian dishes are healthful. Accompanying the modest meat portions are vegetables and fruits, which complement the healthy doses of rice. Iranian food differs from Middle Eastern cuisine because it tends to lean towards complementary tastes, such as sweet and sour or mild and spicy.

Nân is a flat, round bread baked over a bed of small stones. It is another staple food of Persian cuisine. Strong, dark tea, called chây or chai, has replaced Turkish coffee as the hot drink of choice for Iranians. It’s brewed in an urn called a samovar. 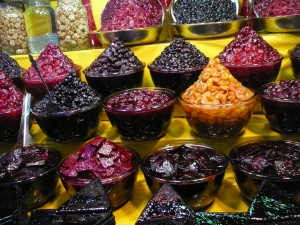 Language Not a Barrier

Speaking English is a highly prized skill in Iran, as people believe it is the gateway to worldliness. In fact, speaking English is a criterion to enter many of the Iranian universities. While Persian is the official language, many Indo-Iranian dialects are spoken. Most signs contain both Persian and English.

As long as Germany, the Arab Emirates, Korea and China continue to supply tourists to Iran, those languages will be heard at the marketplace. Tour guides focus primarily on English, although you can find guides who speak French, German, Greek, Italian and more.

While drinking, wearing heavy makeup and flaunting sexuality are still frowned upon in Iran’s public places, as a culture, the people generally follow the old Persian adage that says: “Whatever goes on between four walls, stays between those walls.”

Many Iranians like to socialize. Parties in private clubs and cafés, in polished villas and expensive apartments feature music and dancing. In the privacy of luxury homes and diplomatic residences, you might find strobe-lit discos and parties revolving around film screenings, dance troupe performances and concerts by underground bands.

In private, Iranians satisfy their cultural passions. They gather to critique each other’s artistic projects, dance to 1970s’ rock-and-roll or energetically revel in Persian-infused flamenco tunes.

Daytime Activities for Everyone

During the days when the weather is steamy, take in the beauty of the country. Ride in a private vehicle with your Iran Luxury Tour guide to view the depth of history still looming large in Iran. Visit the busy downtown bazaars and the majestic, jagged beaches on the Caspian Sea. Stroll through the modern capital of Tehran, play at one of the many mountain ski resorts and find the ancient ruins that dot the region.

“With a long-standing and proud civilization,
Persian culture is among the richest in the world.
Two and a half millennia of inspiring literature, thousands of poets and writers,
magnificent and impressive architecture,
live customs dating back to Zoroastrians over 3000 years ago,
and other unique characteristics of the nation are rivaled by only a few countries.

Some of the highlights you won’t want to miss: 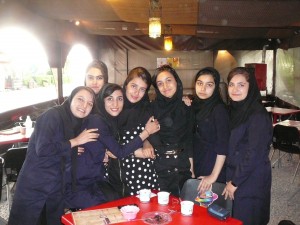 Regardless of your interests, inclinations or invitations, you will find treasures that tickle your imagination and excite your senses throughout the country. Daytime Iran tours, evening Iran strolls and exciting outdoor Iran adventures await you.

Our guides can show you how to experience everything you want to explore. Iran Luxury Travel recruits native guides to ensure your safety and enjoyment. They are at your service.

Create the trip of a lifetime. Travel in the privacy of your own small group. Enjoy Iran up close and personal with only your spouse, if you wish. The choice is yours. The people and the places of Iran await you.

See the beauty of modern Iran and discover the history of Ancient Persia for yourself. Call Iran Luxury Travel at 1-919-726-2044 or contact us online for more information on travel to Iran.

Book a tour for five or more people and earn a free tour for yourself, including airfare. Call for details today.