We have been adding articles by Dr. William Beeman, who traveled to Iran recently with Iran Luxury Travel. This current article should be of interest to anyone who follows events in Iran and, especially, to anyone planning to visit Iran. In our experience, having visited over 80 countries, there is no country other than Iran about which more myths exist in the United  States.

5 Most Common Misconceptions about Iran

Americans have a long way to go before they will be able to cast off misconceptions about Iran, which have been nurtured by nearly 40 years of estrangement between the two nations, and which are now fueling opposition to the nuclear deal.

Recent reporting by the Forward’s Larry Cohler-Esses has been effective in providing a more balanced perspective on Iranian life than is reflected in other mainstream American media. Cohler-Esses spent an intense week asking Iranians about their personal lives, their attitudes toward their own government and toward Americans and other nationalities — particularly Israel. What he discovered will surprise many Americans.

Many Americans assume that Iran is a backward nation filled with poverty and squalor, where the population is dominated by glowering clerics restricting their behavior. Americans see “Death to America” sloganeering as reflective of the values of the Iranian citizenry.

Cohler-Esses presents a very different picture: a thoroughly modern Iran with a large, well-educated youthful population sitting “on the precipice of a huge change.” The millions-strong young Iranian population is fashionable, modern, restive, openly critical of their own government and unabashedly welcoming to American visitors with hospitality that is close to overwhelming. These young people, who constitute two-thirds of the population, have no personal knowledge of the Islamic Revolution of 1978-1979, the Hostage Crisis or Ayatollah Khomeini. They are 100% literate. Virtually all are college-educated, and they are keenly aware of the world outside of Iran, and want to be part of it.

Another major American misconception is that Jews and other religious minorities are oppressed and discriminated against by the conservative Muslim leadership. While discrimination is directed toward the Baha’i community, whose religion has been considered heretical since its founding in the 19th century, it is not true of Jews, Christians, Zoroastrians and other religious groups. 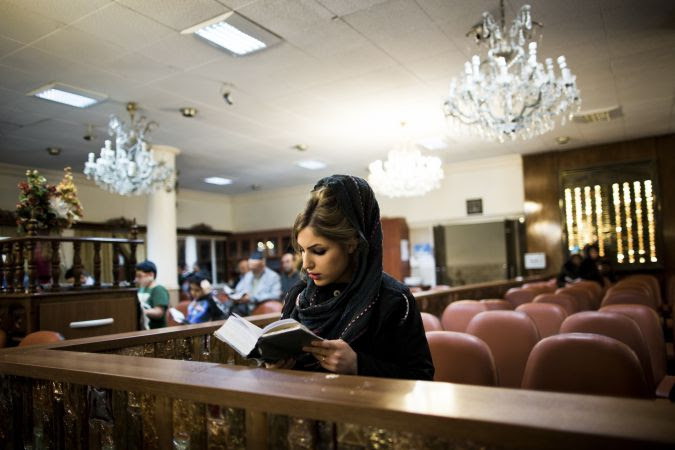 A young Jewish Iranian woman prays at a synagogue in Tehran.

Although some institutional restrictions in terms of government employment do pertain to Jews and other non-Muslims, freedom of religious practice, education and private employment is extended to all these groups. These minority religions have beautiful places of worship, freely self-identify in public, and even manufacture and consume alcohol. Christians may also freely consume pork products. There are seven kosher butchers in Tehran. Religious minority groups all have designated representation in the Iranian parliament. Jewish and Christian youth fought fiercely in the Iran-Iraq war (1980-88), a fact that is regularly cited to foreign visitors by Iranians of all religious confessions.

The Jewish community regularly launches protests when they feel insulted and mistreated. The community leaders are both powerful and respected. These protests are seriously heard and frequently result in corrective action. As journalist Reese Erlich writes:

During [former President] Ahmadinejad’s time, state-owned TV aired several anti-Jewish programs. The Lebanese documentary claimed “Zionists” had plotted to murder the prophet Mohammed. The documentary mischaracterized Jewish-Muslim relations in ancient times, and conflated being Jewish with the Zionist political movement, which didn’t develop until late in the 19th century. [Head of the Tehran Jewish Committee Homayoun Sameyah Najafabadi] said,“That’s a big mistake…. It said the Jews and Zionists are the same, which is completely wrong.” The Jewish Committee protested the documentary and, after the intervention of the country’s Supreme Leader Ali Khamenei, it was no longer aired.

Many Americans assume that Iranians have some primary dedication to Israel’s destruction. Although this is by no means a state-sanctioned policy, some Iranian leaders — primarily during the presidency of Mahmoud Ahmadinejad, which ended in 2013 — have indeed verbally attacked Israel.

But as Cohler-Esses discovered, ordinary Iranians with whom he spoke “have no interest at all in attacking Israel; their concern is with their own sense of isolation and economic struggle.” He quotes Muslim butcher-shop owner Nader Qaderi: “The people of Iran want in some way to show the world that what’s going on in the last years is not the will of the Iranian people but of the Iranian government… We have no hostility against Israel.”

Americans fear that increased income for Iran will be diverted to support “terrorism.” This seems unlikely. The Iranian people already lodge bitter complaints about government spending for adventures abroad. They are already demanding that any resources resulting from the nuclear deal be used primarily for the benefit of Iranian citizens.

The distinction between the government and the people is a common theme in everyday Iranian discourse, as Cohler-Esses noted, and the government has been forced to respond to public protest of hardline tactics in the past. It is largely opined that reformist president Hassan Rouhani was approved for office because of his promise to foster rapprochement with other nations. He, along with Foreign Minister Javad Zarif, are seen as national heroes — the authors of better Iranian relations with the rest of the world.

Many Americans believe they cannot travel to Iran. In fact, it’s relatively easy to visit as a tourist. Jewish Americans are entirely welcome and, as Cohler-Esses discovered, they may enjoy an especially warm welcome from Iranians eager to show their desire to have more peaceful relations with the rest of the world. Visiting Iran is highly recommended. If more Americans could experience this fascinating nation, and see the tremendous potential for positive moves toward peace expressed by Iran’s enormous post-Revolutionary population, there might not be so much opposition to the nuclear deal — arguably the most important foreign policy agreement in modern times.

William O. Beeman is Professor and Chair of the Department of Anthropology at the University of Minnesota. He has conducted research in Iran for more than 40 years, and is the author of numerous